Anyone that knows me knows that I rep the PNW to the fullest (current place of residence be damned), and that I’ve got man crushes on OG PWN snow gods Temple Cummins and Jamie Lynn. Seriously, if you’ve ever had the pleasure of trying to chase Temple around Crystal you know that kid puts the “oooooooh” in smoooooooth (seriously, the guy picks up speed while travering uphill), and Jamie Lynn’s method airs need no introduction nor explanation.

Anyways, was poking around over at shayboarder and caught this pic of the the 09/10 Gnu Billy Goat (it should be noted I’ve never actually seen billy goats up at Crystal Mountain…sad).  Looks like they kept the banana in the sundae but added a scoop of Mervin love with some extra special C2 sauce per their teaser press release below.  My only concern is that Temple “only” got 3rd in the Baker banked this year, maybe this technology is actually an evil plot to regress shredsled technology? One day I’d like to pick up one of these boards to find out myself.

Blown up a bit 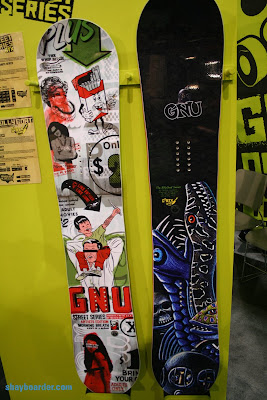 If your local shop doesn’t carry it you can check out the Billy Goat and the complete Gnu line at online retailers Snowboard Connection and evoGear. Both are cool shops in Seattle and not just another faceless warehouse in the midwest. SnoConn was hte OG shop, originally under the viaduct and now across from REI (though the viaduct store is still there, just not in it’s former glory)